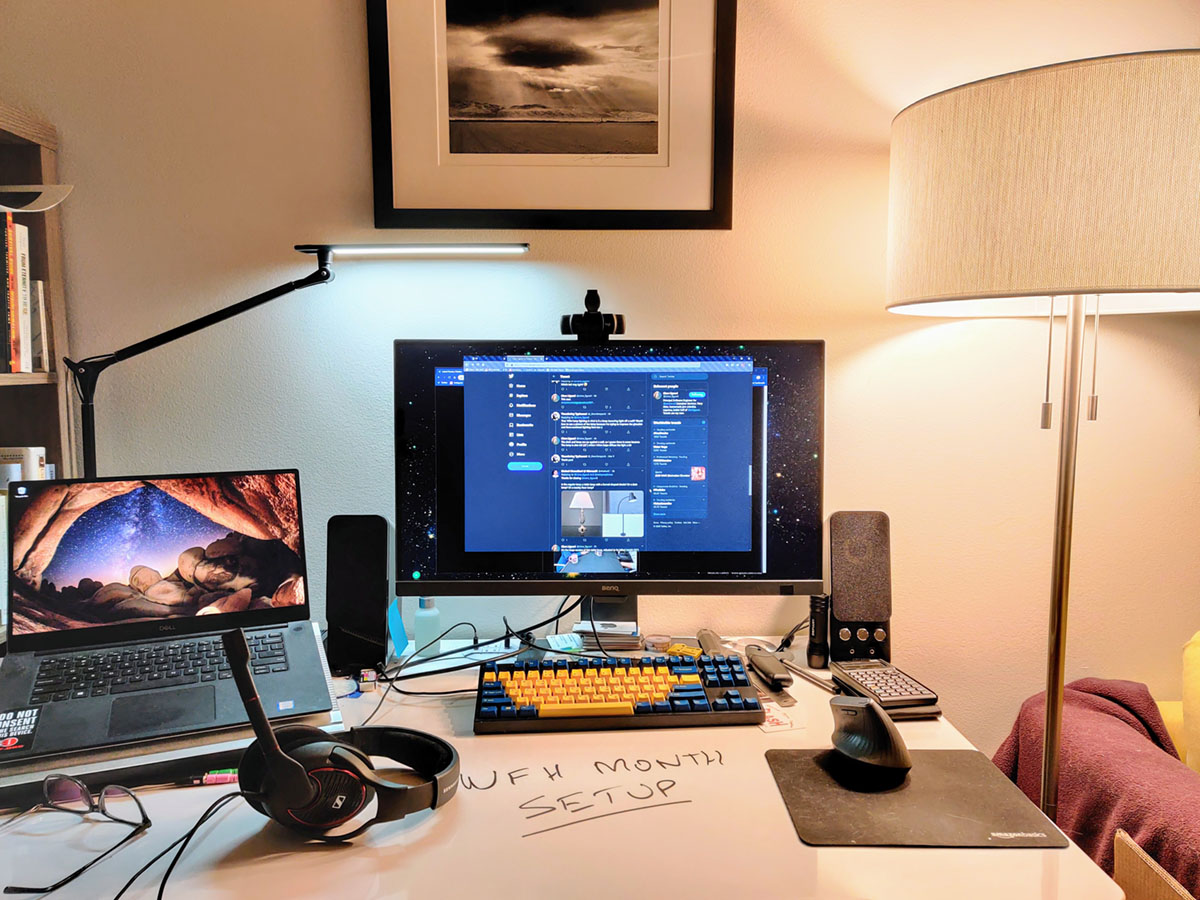 A few days ago I wrote that a lot of things aren’t coming back and we shouldn’t be looking for them to do so.

Let’s start with one of the ones that is most on people’s minds, as we continue to debate getting “back to work.” What does that even mean today? While it’s clear that “work” will come back for most of us, it’s likely to be changed in many ways. Some of these changes will become permanent, if only because they turn out to save a lot of money.

I’ve been working at home since February 28th. That was the second time that my team decided we should “experiment” with working from home to see how we might handle it if it became necessary. We had another planned day the following Monday, March 2nd. By March 3rd, it was pretty obvious that WFH was going to be the requirement going forward. I went in that morning for one meeting that everybody but two of us attended remotely, and to collect some things from my desk. By the end of the day it was official that we would be at home until further notice. It’s April 24 and we sill are, with no word on when we’ll go back on even a part-time basis. My current guess is June.

It was a difficult adjustment for many. I was in better shape than most with existing fiber-optic internet, a real desk, a large monitor and a dock. Others had to adjust and some had to go to the office to retrieve monitors and other things (some, I’m told, have even wheeled their desk chairs out). Company policy on reimbursement for such things hasn’t quite caught up, but as this becomes the norm (as I think it will) the policies will adjust. I can see a world in which you get a large monitor, a desk and a chair shipped to your home as part of onboarding. Maybe you have to give it back when you leave, or maybe like moving expenses it’s forgiven after a certain amount of time. No matter, policies will adjust.

Speaking of onboarding, we’ve continued to do it. It’s been an adjustment, and even weird at times, but we’re getting better. Interviews moved online 2 months ago at this point. Once again, the reality of distributed teams means that most interview days already often included one or two remote interviewers. Now it’s full time. I don’t know what the results have been, but I’m sure somebody is compiling the statistics, figuring out what works, what doesn’t and what needs to change. Will we go back? Doubtful. Maybe we’ll need to add an additional “in person” step for the small percentage we’re inclined to hire based on the video interviews. But I can’t see us going back to the expensive and logistically challenging practice of flying in hundreds of candidates every week, most of whom won’t be extended offers.

And of course, we’ll all be traveling a lot less. That’s one of the things we’ve definitely proven we can do less of. I’ll have more about that when I discuss travel in a couple of days.

There’s no reason to go back

There is at this point, no reason that policies should go back completely. We’ve proven fairly well that an awful lot of work can be done remotely. There are still missing capabilities (I’d kill for a good whitboard-sharing application) and there are good reasons for meeting in person from time to time, if only because it’s the best way to generate incidental discussions and interactions that generate new ideas. But commute to the office every day just to sit there, or maybe attend a few meetings which even in the best of time were at least partly attended by people connecting remotely from other locations? Why?

This has huge implications to the long-term use and development of office space. Across from my office there’s a new building going up. Supposedly my employer’s last big one in Seattle. Another is being built across the lake in Bellevue? Will these be the last big ones for decades to come? Quite possibly. If we can all work in the office part time, we will need a lot less space no matter how much the business grows. Carl Icahn’s bet against commercial real estate seems quite reasonable, even from current depressed levels.

The effect will be uneven. There will also continue to be lots of experimentation. Some environments can’t support work from home at all. Others could go to 100%. Places like my employer will likely see bigger changes than some others. Overall, I can see the number of people in the economy who are eligible for WFH doubling almost immediately from a low base. The number who can do partial WFH will probably grow more significantly, in terms of numbers if not percentages. More than that, many of the “informal” arrangements that many of my co-workers have taken advantage of occasionally will become more formalized: 2-3 days a week away, alternating with others so as to lower density in the office.

Certainly, some businesses will prefer going back to “normal” even if they don’t strictly have to. Some have resisted even part-time WFH even as others have proven it can work. Some clearly don’t have the tools or technological capabilities today to support this.

That’s going to change. It will have to. As a friend of mine noted a while back, anybody whose business plan is predicated on the assumption that my employer (or another company like it) is not going to compete with them is sticking their head in the sand. So, if you think you’re going to continue spending money on finding space for everybody to have a desk (maybe a bigger desk, given social distancing realities), while your competitors figure out ways to have people come into the office 2 days a week, you’re going to lose, and lose big.

For myself, I like having some days on which I can just focus on bigger problems and dig in deep without the constant interruption of the physical office. I’m also relatively fortunate in that I’ll be able to make this kind of an arrangement one of my bargaining points going forward. Before the crisis I was getting several contacts a month from serious potential employers.

That’s subsided for now, but I have no doubt the contacts will come back in time. While I have no particular plans to move on any time soon, “2 days a week working remotely” is likely to be part of my demand going forward. I know it can be done and I know I can do it. I’m privileged to be in a situation where I expect I can afford to make this a condition. Not everybody will be able to get away with it right away. But the more of us who do, the more it becomes normalized, the more it’ll be something everybody gets. If you don’t want to offer this, you will have a tough time attracting some people. Good luck.

Every crisis forces some changes and some of them become permanent. The impact of so many people working remotely for so long is going to have it’s impact. There are some things that we’ve already found to be wastes of time and money, that will never go back to “the way they were.” Those politicians claiming otherwise are living in a dream world.